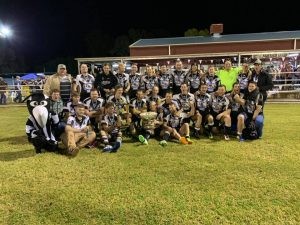 the edge of their seats, with the magpies playing at home the grounds were a sea of black and white.

The game started well with Matt Wemyss going over for the first try and Dan MaNamara Converting for a 6 – 0 lead going into the second half.

John Hauff was the next to swoop arcoss the line with Jake Richarardson converting to take the Magpies to  12 – 0.

In the closing minutes Cody Trost powered across the line and John Turlan converted for a Full Time Score 18 – 0.

The Magpies defense was too strong for the Devils attack from start to finish.

BLACKALL SOMETHING FOR EVERY ONE

Back to all news
Up to Date